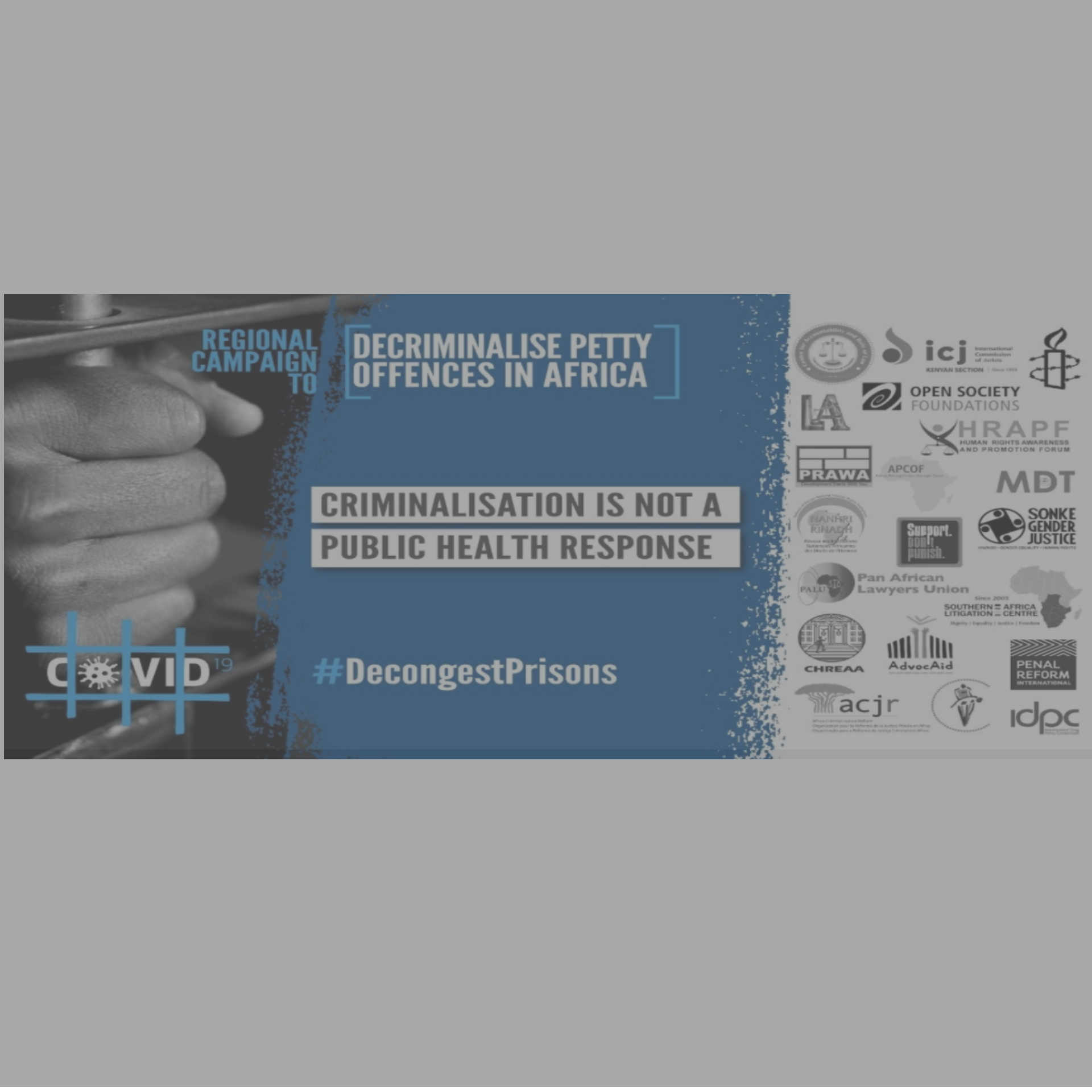 Submission to the Special Rapporteur on Prisons, Conditions of Detention and Policing in Africa

The Regional Campaign remains deeply concerned about the criminalisation of poverty across our continent. While we welcome the African Commission’s adoption of the Principles on the Decriminalisation of Petty Offences, we urge the Commission, through the Special Rapporteur, to increase the visibility of the Principles and to further promote their implementation by Member States. This is particularly crucial during the current global Covid-19 pandemic which has exposed and exploited inequalities. Specifically, we have observed the enactment of legislative and regulatory instruments to curb the spread of Covid-19 which are increasingly impacting the poor and marginalised, and resulting in criminal justice sanctions in the context of what are public health and social justice issues.

The Regional Campaign raises the following issues in detail for consideration by the Special Rapporteur:

Though we do not provide further detail in this submission, we nonetheless note our concern and request the Special Rapporteur to take action regarding:

2. The impact of Covid-19 regulations on the poor and marginalised, including issues pertaining to criminalisation, enforcement and sanctions

To curb the spread of Covid-19, several Member States have made declarations of states of emergency or disaster, and/or enacted legislative and regulatory instruments to limit a range of human rights, mostly related to movement and gathering. In some instances, the laws relating to disaster and public health emergencies used as the basis for Covid-19 measures were drafted long before the entrenchment of human rights in the country’s Constitution. Criminal sanctions imposed through the emergency regulations enabled by the declaration of a state of emergency or in terms of the regulations issued under disaster or public health laws, have at times circumvented parliamentary oversight, despite the limitations of rights resulting from such sanctions.

The Covid-19 measures include powers for law enforcement officials, and in some instances the military, to use powers of arrest and detention to enforce compliance with the instruments. However, there is a growing evidence that both the nature of the new ‘offences’ being created through Covid-19 related instruments, as well as their enforcement by law enforcement officials, are having a disproportionate impact on the rights of persons who are poor or otherwise marginalised. This is particularly so when orders to isolate or remain at home are made impossible by homelessness, shared outdoor ablution facilities in informal settlements, the needs of daily wage earners (including those in the informal sector) to make enough money to survive, to name just a few examples. In many instances, Covid-19 related instruments have created new criminal or administrative offences that attract fines and terms of imprisonment, raising significant concerns regarding the proportionality and necessity of these measures in the development context of most Member States.

Also of significant concern to the Regional Campaign is the increasingly militarised and brutal responses by law enforcement officials to violations of instruments that should have been designed from a public health, rather than a criminal justice or /administrative, perspective. There is growing evidence of a range of violations of non-derogable rights, including the right to life and freedom from torture and other ill-treatment, across the continent. The police have been filmed using excessive and brutal force against people, most especially the poor, which have resulted in significant physical and psychological injury, or death. In some Member States, law enforcement officials have extorted persons arrested who and  do not want to go to quarantine for 14 days.

Our concerns extend to the death of Mr. Collins Khosa by South African law enforcement officials, for which the Gauteng High Court has issued orders for law enforcement in South Africa to develop guidelines on the use of force in the context of Covid-19 regulation enforcement. Elsewhere on the continent, reports of police brutality in the enforcement of lockdown or curfew regulations in countries such as Kenya, and Uganda are also of great concern. This is despite calls from the United Nations warning governments not to flout the rule of law through the use of emergency powers in the name of  fighting the virus but rather that they may use force only when strictly necessary and to the extent required for the performance of their duty in compliance with relevant international norms and standards. Even then, the UN guidelines stipulate that all allegations of human rights violations must be effectively and promptly investigated and perpetrators should be brought to justice.

The Campaign urges the Commission, through the Special Rapporteur, to remind Member States of their obligation to ensure that human rights law must inform legislative and regulatory instruments enacted to curb the spread of Covid-19, and their enforcement, are legitimate, proportionate and necessary, and based on the best available evidence from a public health approach. The criminalisation of movement, work and other activities, for which the poor and marginalised are disproportionately non-compliant for reasons described above, are contrary to the African Charter, as interpreted by the Principles on the Decriminalisation of Petty Offences.

3. The impact of COVID-19 on detainees across African prisons, and the general failure of Member States to take extraordinary measures to tackle overcrowding in prisons

The Campaign submits, however, that more can be done to protect the health of detainees and the broader public, firstly by preventing the arrival of new detainees in prison during the Covid-19 pandemic, for instance through an increased use of alternatives to detention, and by ordering the release of a higher number of detainees.

The use of arrest and detention should be avoided and be used as a measure of last resort and for the most serious offences. Member States, through the interpretation of the African Charter by the Luanda Guidelines and Principles on the Decriminalisation of Petty Offences in Africa, have an obligation to limit the use of pre-trial detention and implement the use of non-custodial measures. Non-custodial measures such as cautions or warnings should be encouraged as alternatives to detention. Decongestion measures should, in line with the Luanda Guidelines and Decriminalisation Principles, including persons held for petty offences, persons with underlying health conditions, and those that have been rehabilitated and pose limited risk to society. Fines should be considered for serious offences committed. In assessing the appropriate sum of a fine, consideration should be given to the individual circumstances, including gender-specific impacts. This is particularly relevant for jobless people or those not generating income because of the emergency measures.

In some countries, such as Madagascar, the government has ordered the release of certain categories of detainees (older persons, children who had been convicted and have already carried out more than half their sentence) while excluding pre-trial detainees from those who could benefit from special measures, despite the prison population being composed of more than 50% of pre-trial detainees. The impact of such measures on some of the most vulnerable groups of population in prison, such as women and minors, has been minimal: out of 998 children in detention as of March 2020, only 263 have been sentenced, and amongst those 263, only a handful would have carried out half their sentence. Minors held in pre-trial detention, who often are amongst the most vulnerable groups of the prison population because of their lack of access to a lawyer, unfortunately cannot benefit from any special measures aimed at protecting the health of detainees during the pandemic.

The Covid-19 pandemic illustrates the dire consequences of the ongoing failure of states to improve prison health care and public health care.  The current conditions in prisons throughout Africa are simply not conducive to prevent the transmission of Covid-19 in prisons without resorting to a drastic release of prisoners. Already, many persons in places of detention receive limited health care for tuberculosis, diabetes, and HIV. In most prisons measures such as social distancing and regular hand washing are impossible to maintain and unhygienic and crowded conditions increase the risk of transmission. In many countries the mass screening of prisoners and prison staff will be unlikely in the context of limited testing kits and laboratories. The sustainable provision of personal protective equipment in prisons is critical.The consequences of failures by Member States to reduce overcrowding in prisons are significant. It can also increase tension in already difficult environments. In Togo, for example, there was a prison mutiny in Lomé due to overcrowding. Persons detained in the remand centre refused to take in new referrals  after 19 out of 283 persons tested persons detained  had tested  positive for Covid-19. The prison, which was built during the colonial era for a maximum of 600 detainees holds more than 1500 detainees.

Furthermore, measures adopted to reduce risks of Covid-19 in prisons have targeted at the prison population in general, without proper consideration as to how the responses should be tailored to address the specific needs of women prisoners. In Nigeria, only one woman has so far benefited from early release among the 29 persons symbolically released by the Minister of Interior at the inception of the Presidential Release of Inmates to curb the spread of the Covid-19 in Correctional Centres.  In Malawi, The Gambia, and Sierra Leone, no specific measures have been enacted to allow for the release of pregnant or breastfeeding women or those with children living in prison with them, despite recommendations from the World Health Organization and the UN Office of the High Commissioner for Human Rights, among others.

In many countries, Covid-19 measures include prohibiting prison visits and limiting access to courts. Such measures increase the time persons remain in pre-trial detention and increase their exposure to disease in prisoners. Furthermore, in some countries, Covid-19 measures had the result that in many states visits by family and by oversight mechanisms were stopped. On the one hand there is an obligation to protect prisoners and detainees from a contagious disease, but there is a simultaneous obligation to ensure that the minimum standards of detention are met and that prisoners and detainees have access to family and an independent complaints mechanism.

Member States have a legal duty of care towards prisoners. To promote accountability, they should be encouraged to publish and enforce plans to prevent, stop or slow the spread of Covid-19 in places of detention, allow external monitors to these detention facilities for accountability and ensure the establishment of  establishing screening facilities for individuals entering and for those being released from places of detention.

The Campaign urges the Commission, through the Special Rapporteur, to remind Member States of their obligation to ensure that conditions of detention comply with relevant human rights standards, including the right to freedom from ill-treatment, and the highest attainable standard of health. Member States should be encouraged to implement their obligations under the African Charter, including as interpreted by the Luanda Guidelines and Decriminalisation Principles to ensure that appropriate and rights-based measures are in place to reduce overcrowding in places of detention, and that for those for whom ongoing detention is proportionate and necessary, that detention environments are rights-compliant and protect the health and well-being of detainees (and staff).

The issues of arbitrary arrest, the impact on the poor of criminalisation and enforcement of minor offences, and of overcrowding levels in many African systems are pre-existing public health and human rights crisis concern. While the measures taken in the context of Covid-19 by Member States to radically  reduce the number of persons held in detention are welcome, these must not remain exceptional measures in the context of a pandemic. In the short-term, they must be urgently accelerated and expanded. In the long-term, they should be built on, harnessed, and expanded so that criminalisation of life sustaining activities in public spaces, and prison conditions do not continue to violate human rights. The Commission, through the Special Rapporteur, is urged to remind Member States of their obligations with regards to safe and rights-compliant detention environments, and promote permanent alternatives to detention, particularly for minor offences, urgently now, and in the post-Covid-19 era.

Director of Research and Programmes