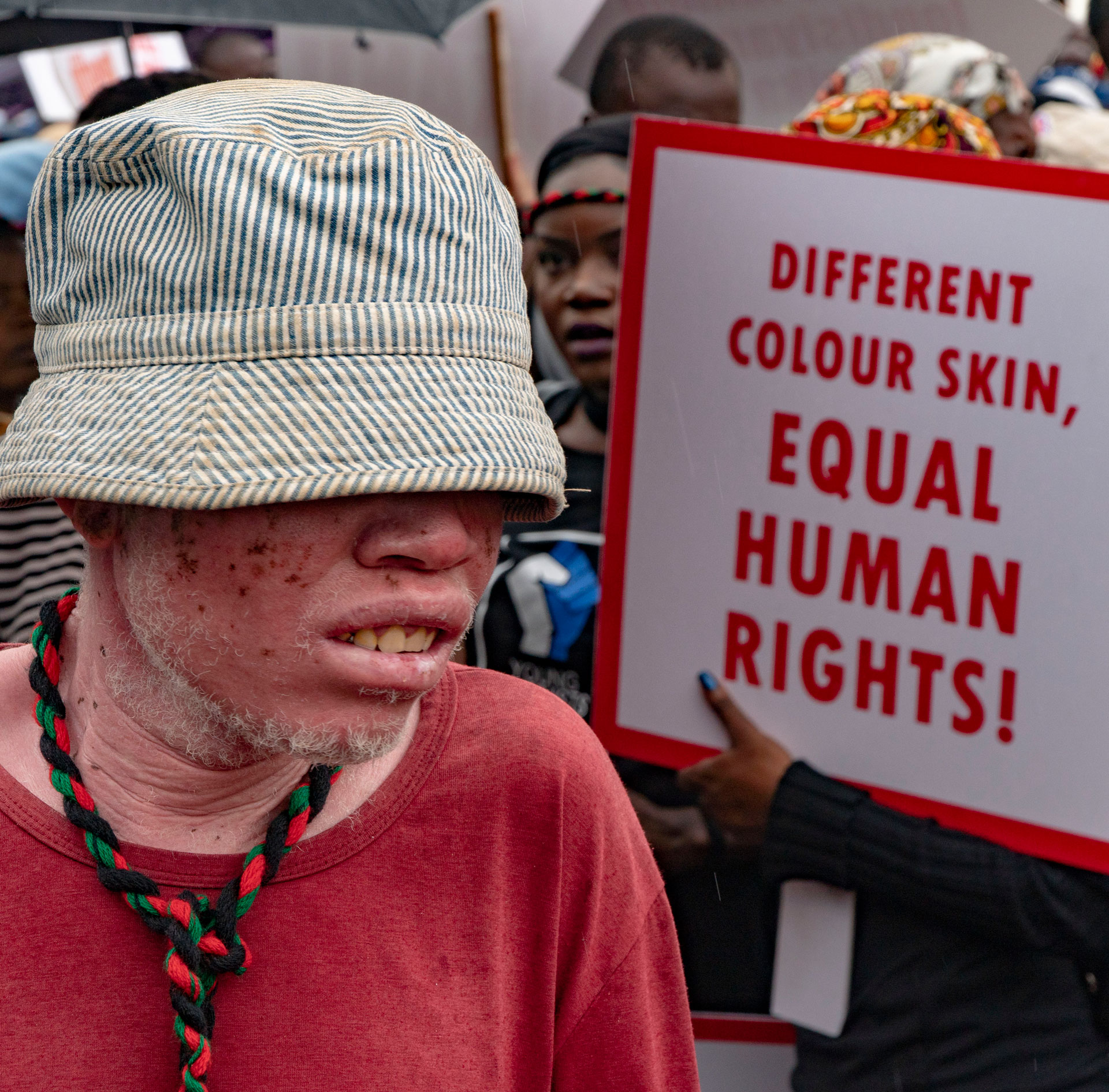 The occasion of International Albinism Awareness Day (IAAD), commemorated annually on June 13, is always an occasion for mixed emotions. Ranging from anger to despair and hope, these emotions also reveal deep-seated complexities, and arouse wringing questions on humanity itself. Year after year, it seems the questions remain unresolved and the problems grow even bigger. And with every year that passes, a commemoration of Albinism awareness accompanies it too. For IAAD last year, 2018, I was in Malawi where I attended a series of events marking the day. The big win, I suppose, was the official launch of the National Action Plan on Albinism, spearheaded by the government of Malawi, civil society groups and selected multilateral institutions.

Notably, Malawi and Mozambique remain the countries that experience the highest number of attacks on people with Albinism in southern Africa. In Mozambique, for example, cases of abductions and killings of people with Albinism have been reported in the Nampula Province as recently as May this year. In March, a 6-year-old boy disappeared in Larde district and in May, an 11-year-old girl was abducted in Murrupula district and later found dead, with her limbs cut off. No arrests have been made yet with respect to the Larde attack while three people have been arrested in respect of the Murrupula abduction and murder. At the height of attacks in Mozambique, around 2015, a record 60 attacks were reported.

In Malawi, the launch of the National Action Plan generated much hope. This moment was, however, interrupted by a resurgence in killings and abductions, with at least 4 killings having happened since then. The most recent killings include the brutal killing of 54-year old Yasin Phiri on New Year’s eve. On the 21 January this year, a 1-year 6 months old child, Eunice Nkhonjera, was abducted from her mother’s bed in the middle of the night. Arrests have since been made in the murder of Phiri. A suspect in the matter of the Eunice Nkonjera murder is said to have committed suicide shortly before he was arrested.

I have since been to Malawi again, most recently this past May. Coming as it did against the backdrop of a litany of challenges which people with albinism are facing in the country, principal to which was the extremely lethargic pace at which matters involving attacks on persons with albinism were being pursued, the visit was also an opportunity to reflect. This time, last year, there had only been one matter involving an attempted murder that had been finalised in the courts with a guilty verdict passed. However, there were 21 murders that had been reported since 2014. Currently, there are 28 files which the Director of Public Prosecutions (DPP) is seized with. Some of the matters have since been finalised, with sentences that include a death penalty having been handed down.

The death penalty itself is controversial. However, in my conversations with the DPP, Mary Kachali, and the Counsel leading the prosecution of murder suspects for persons with albinism, Dr Steve Kayuni, they both informed me that the DPP’s office had adopted a deliberate policy of seeking the death penalty in every matter they were prosecuting involving the murder of a person with albinism. Kachali and Kayuni both acknowledged their awareness of the fact that this position puts them at odds with various human rights instruments, organisations and funding partners. Their counter-point, however, is that if they are to be taken seriously with prosecutions, then nothing less than the death penalty will suffice.

The objective background to this position is that since last year, the DPP and the Judiciary have acknowledged it was folly to treat matters of people with albinism in the same way as they treat other matters. Hence, it has since been decided that matters involving attacks on people with albinism will be fast-tracked. As such, additional judges and resident magistrates are being hired and because of this, prosecutions are happening at a reasonably faster pace, much to the relief of those who have previously had choice words for the criminal justice system in Malawi.

There are limitations, of course. For example, matters of suspected murder victims who upon abduction are never found require – by law – that families of such persons as well as the DPP wait 7 years before the victim can be presumed dead. This has, therefore, resulted in having suspects who cannot be tried because of the protracted period of presumption of death. This notwithstanding that in some cases, circumstantial evidence strongly suggests that the victim was possibly disappeared and murdered by the suspect.

While the discourse on open African borders favours openness and less vexatious migration, the consequences for people with albinism demand significant attention. For example, there are no extradition agreements between Malawi, Mozambique and Tanzania, countries that have witnessed brutal attacks on people with albinism. In Malawi, as a result, the Office of the Solicitor General has written to the Ministry of Foreign Affairs requesting that extradition treaties be concluded between these neighbours so as to facilitate the return of suspects who are evading prosecution from their respective countries. The DPP has, as a further means of declaration of their intent in prosecuting matters of suspects who violate people with albinism, invited the Association of Persons with Albinism in Malawi (APAM) to avail itself to make statements on aggravating circumstances prior to sentencing. They have also invited APAM to monthly meetings where they give updates to APAM on the status of each matter they are handling.

Additionally, the Ministry of Gender, Children, Disability and Social Welfare has since recognised the attacks on people with Albinism as a national crisis. Thus, a task force which brings together various ministries has been set up, including the ministries of Justice, Education, Health, Gender, Children, Disability and Social Welfare, Lands, the Police department, academia as represented by the University of Malawi’s College of Medicine as well as development partners. Malawi’s National Action Plan will cost an estimated USD 4million to deliver. With no clear funding plan, however, various ministries and departments have been asked to use their own budgetary allocations to champion the response. For the national task force set-up by the presidency, approximately USD 340,000 has been released. The Malawi Police Service is currently distributing panic buttons to people with albinism in various parts of the country. These gadgets are below 2000 in total. Plans are underway to integrate the panic buttons into a communications system that enables law enforcement agencies to act with haste while obtaining crucial evidence at the same time.

In the interim, the task force on albinism has recommended several options. One such option is the call – by the Ministry of Education – for the placement of children with albinism in boarding schools across the country. 43 children have taken this offer. Teachers with albinism have also been encouraged to apply for transfers from rural schools to trading centres and even cities where possible. This is anticipated to add more security layers for them. Also, the Ministry of Lands has received a pledge of USD 1,350-million with which they intend to build at least 193 houses for people with albinism. In addition, the University of Malawi’s College of Medicine is trying to discern some scientific understanding of what the possible drivers of the attacks in Malawi are.

Previous estimates have suggested that Malawi has approximately 17,000 people with albinism. However, latest census results indicate there are almost 135,000 people with albinism in Malawi, representing approximately 0.8% of the total population. Given the rate of attacks, some parents of children with albinism in Malawi are so afraid and they have gone to foreign embassies in Malawi to seek asylum. So have some adults who fear for their safety in Malawi. Whilst seeking asylum might seem over-the-top, the reality is that there appears to be no tangible way out for victims, and potential victims of attacks on people with albinism in countries like Malawi. For example, the chairperson of the presidential task-force on albinism, Dr. Heatherwick Ntaba, has often wondered whether the banning of witchcraft might be an answer to ending attacks. This thought is informed by the belief that that attackers usually act consistently with instructions from witch doctors. This, in itself, is a body of work that the Open Society Initiative for Southern Africa (OSISA) is beginning to explore.

There are several other challenges though. For example, the death of potential witnesses, and at times suspects at the hands of the police and prison authorities is proving to be of significant concern in countries like Malawi. Recently, reports emerged of one witness who is said to be gravely ill after suspected poisoning. Another witness died in custody under suspicious circumstances. Yet another witness has made some sensational claims about the possible complicity of high-ranking officials in the killings. The President of Malawi has come under heavy criticism particularly from Malawian civil society for being too quiet at times when it really matters. It did not help matters that the then Minister of Homeland Security, Nicholas Dausi, once publicly stated that not enough people with albinism have died in Malawi to warrant the type of reaction that APAM and other civil society actors are calling for.

Save to say, Malawi, Mozambique and Tanzania are not the only sites of concern across southern Africa. In Eswatini (formerly Swaziland), for example, judgment is still awaited in the matter involving the killing of Sipho Mahlalela, in which his wife is the principal suspect along with two other men. South Africa is currently awaiting the extradition of an Eswatini traditional healer who, in concert with others, is accused of having had a hand in the killing of a South African citizen with albinism. And, although Mozambique has also adopted a National Action Plan, not much has been heard about its roll-out and challenges therein. Curiously, SADC Heads of State and Government have not been quite as engaged on this matter. One wonders why.

Perhaps the inaction also explains the lack of funding towards national action plans. The failure to apportion sufficient resources by the various states that have crafted national action plans suggest that they are not sufficiently appalled by what is happening. As OSISA, we remain committed to ensuring that this matter remains on the radar until all SADC citizens with albinism are safe from attacks. It is for this reason that, on the occasion of International Albinism Awareness Day, we call for deeper reflection on the issue of Albinism in Africa.

Muzi Masuku is the Programme Manager responsible for Disability Rights at the Open Society Initiative for Southern Africa (OSISA – www.osisa.org)