Girl Learner Back to School Project in Malawi 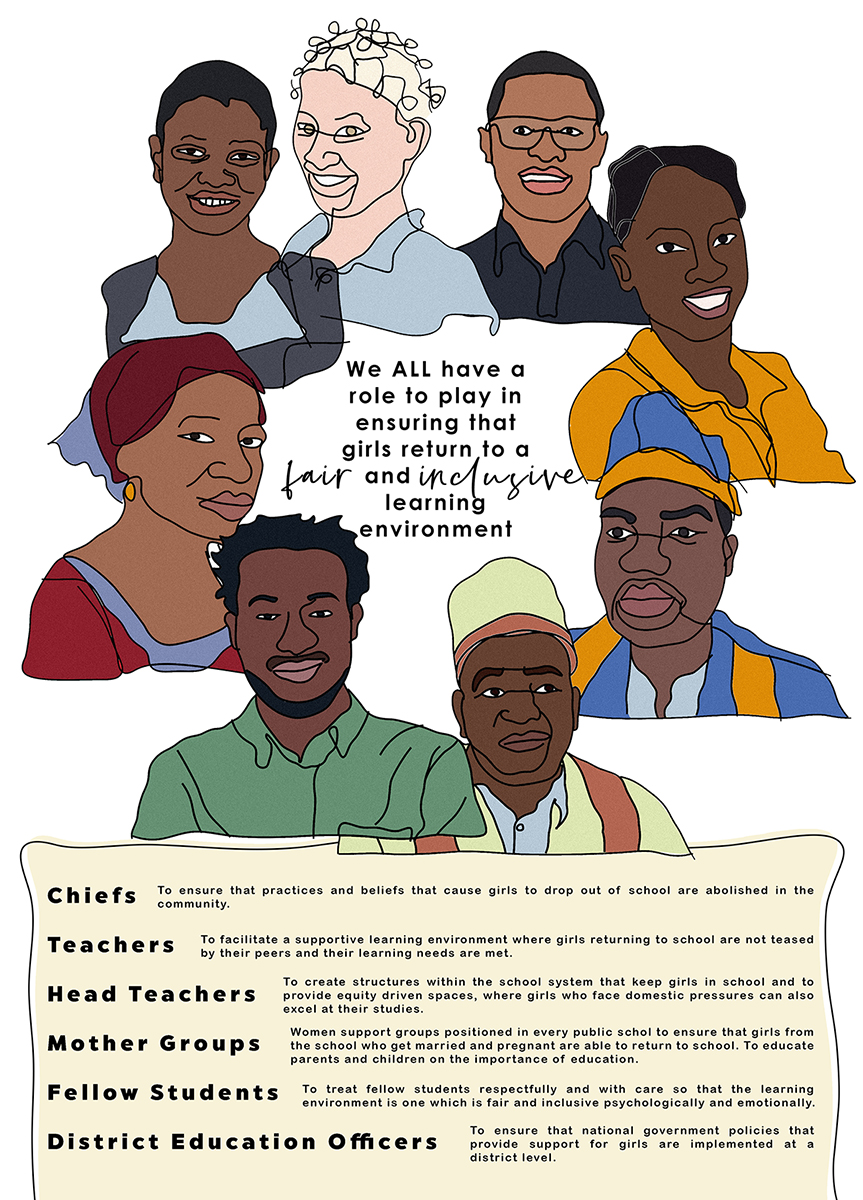 We all have a role to play in ensuring that girls return to a fair and inclusive learning environment.

Did you face any challenges as a girl child going to school?

My parents were very, very encouraging in my pursuit for education. However, there was a point in my secondary school education where I could sense that the school setup and the classroom setup encourages the boy child more. There’s been a shift over the past 10 years or so, but when I was in school the boy child was given more attention because their success was something that was expected, someone could already foresee the success of a boy child as compared to a girl child. Growing up, I didn’t think about it much but now that I’m older I definitely see the difference. I remember in my school, the top performing boys had a group, they used to call themselves the G6. They always met after classes until later on in the evening, just so they can study. I went to a day secondary school, everyone else would go home, but they used to stay. My best friend and I really wanted to be part of this group and they didn’t allow us. Already, that setup wasn’t encouraging for us girls because the boys would leave school at 8pm and in Malawi 8pm is quite late for girls to be out. There weren’t a lot of girls that were encouraged to be in school. In that year there were only two girls that made it to university, including myself. All the boys that were in the G6 went to university and a few others as well. I lost touch with so many of my female friends from secondary school. In Malawi there’s a huge gap between people who didn’t do any tertiary education and those who finished at secondary. It wasn’t easy for me or anyone to setup a group for girls to encourage each other.

We face several challenges when trying to send girls back to school, I’ll highlight a few. I have noticed that in Malawi, there is a lot of limitations in the way we implement our policies because everyone is looking at how best they can get something out of what is being done. Every time we have something going on with stakeholders, if they don’t see any potential personal benefit the turn up is low. We know that we can’t achieve much without involving the government, courts, and community leaders. There’s a lot of delegation to interns in different public departments. For example, if the Department of Social Welfare sends an intern, the Department of Youth sends an intern, the Department of Health sends an intern, everyone sends an intern, the participation is there but the value of what we’re doing is limited. There isn’t much personal benefit with what we do so it’s difficult to get certain stakeholders on board. However, with this project – sending girl learners back to school, we’ve been able to interact with different stakeholders and they have been very active and present. But the main challenge has been dealing with people in top positions. They have the power to give penalties and punishments when implementing policies but they are the ones who don’t show up, they just receive reports. 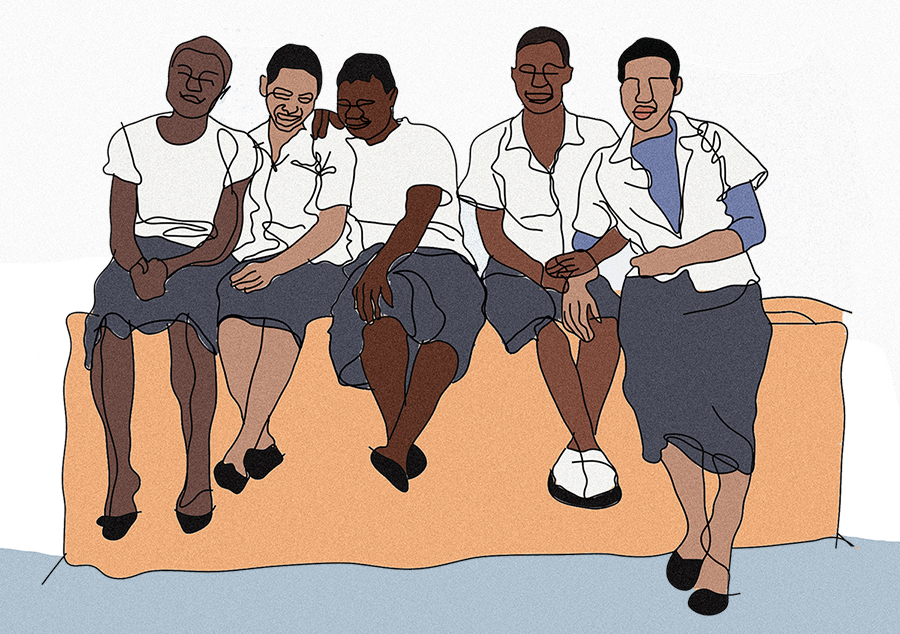 What challenges do you face when sending girls back to school?

On this particular project, school closures have been a major issue for us and it has been limiting us because our main focus is getting girls back in school. When we just started working on the project, girl learners were out of school for 6 to 7 months and there was little hope because they weren’t being attended to. Most of them got married or got pregnant, but now that schools have reopened and things are opening up, a lot of girls are saying ‘Okay, I don’t have fees’, or ‘I don’t have a uniform’, ‘I don’t have notebooks’, ‘I need sanitary pads’… the school infrastructure is not very welcoming. It’s even worse when girls are going through puberty, because they give excuses such as ‘I had to stay out of school the entire week because I was menstruating’.

Generally, these girls have a lack of role models. That’s why the best person for these sorts of interventions is usually a woman. When you go to the typical rural areas, you will see that the girls have no access to civilization and their dreams go as far as being someone’s wife or owning land. There is a desperate need for role models in the communities: people working for NGO’s, women that are inspiring in their communities. I was told that there is a school in Mzimba, where the school does not even have a female teacher, as well as in Chitipa. So, you can imagine! The girls don’t see any inspiring role models at any level. The Ministry of Gender, Children and Disabilities in Malawi has different sectors, and under these different sectors, the ministry is making sure that there are female representatives. For example, at PTA’s, there must always be a female representative, Area Development Committee, Village Development Committees, school management committees, child protection committees, all these governing structures that are setup at community level should always have women representatives. It’s a great policy and it’s being implemented. However, the women in these spaces are not always educated. I guess it’s something that is a continuing cycle because the girl child is not getting educated. I’ve been thinking about it how we can bring mentorship into our programs when schools re-open. Every time we have activities in the schools, I will make sure I have females that come with us, who are just talking to the girls separately – especially the girls who have re-enrolled… just providing psychological support, giving them an opportunity to ask questions, and educating them on different career options.

What would you like to see happen as schools re-open?

As more schools open up, I would like to see better initiative being taken by the schools. There’s a gap in the mindset of how people view education and how we would like them to value education. There are all these roles that we place on school children… we say ‘get educated to be a nurse, or a doctor, or a pilot, roles which aren’t actually so prominent’. Whenever I am doing advocacy campaigns or awareness, I don’t mention these roles, I want people to understand that even as a housewife you have to be educated. I have been told by several women in mother groups (groups of women in each school who track down girls and send them back to school) that girls say to them, ‘Why should I go back to school? My parents are not educated, but they provide food, we have land and I will never struggle’ or ‘I will get married off to someone who is rich and therefore I do not need education’. I like to give this example to young women: when you are married and have a baby who is under 5, your baby will constantly need medication for different reasons. In those moments, you need education to say ‘this is the appropriate dosage’, ‘this is the illness’, you need education for daily life skills. I like to give this example so that young girls don’t just think ‘when I grow up, I want to be a nurse’, they should think ‘I need to get educated to make myself better’. Even to business someday – selling tomatoes, or to make basic financial transactions education is important. We have a long way to go but everyone’s input in this is important. There is a difference between the way I think and the way a mother of 11 children who is not educated thinks and how they live their day-to-day life.

Even outside of formal education, it’s not just up to the girls and their parents, how do community members treat girls? I don’t think there should constantly be an issue of rape. This has been happening a lot in Malawi recently, there are rape cases all over the place… and those are only the cases that are being publicized. We only get to hear when someone has been sentenced, but there are several more which are still in court or the culprits ran away and authorities never heard about it. We need general civic education, so that people in the community understand that offences such as rape are wrong and they will get penalized when they get caught. It’s important for all of us to take part in educating our nation, so that general life skills are taught.

Are girls who returned to school getting discouraged because of the school closures?

Yeah definitely! I don’t have the facts but even just from observation. I have a cousin in Form 4 (the final year of Secondary School in Malawi) who was meant to be done with school in 2020. After Covid hit, they didn’t know when they would write exams. They eventually wrote the exams in October and the exams got leaked, so they were postponed for the second time to 2021. Her class had been in Form 4 since 2019 which meant that they would be in the same class for 2 years. I remember someone took a video of my cousin screaming, yelling that ‘I’m done with school! I don’t want to do this anymore’. For her, you wouldn’t think that she would be considering dropping out because her father has a masters degree and her mother is a teacher. So, you’d think that she’s not being realistic, but that tells you that someone is actually thinking about it. I’ve heard of a couple more kids, who’ve said ‘You know what, I just want to write the exams and get over it’. Imagine what it’s like for someone in a typical Malawian village setting who has no one to encourage them and they have struggled through their entire education because of poverty.

There’s a particular school in Chitipa that had Standard 8 exams (final year of primary school). During the Covid-19 break, the school lost all the females in that class… so essentially the Standard 8 class had no females writing exams. I don’t know how many people the class had, but even if the class had only 5 girls, that’s still a 100% dropout rate of the females. I’m really interested to know more about this school. Even if all of the girls got pregnant, they should be allowed to go back to school and write the exam.