Presidential term limits in Africa: what should be done?

Presidential term limits in Africa: what should be done?

Should presidential term limits matter in Africa? Why do some Africans presidents insist on staying in power well beyond prescribed terms in office? Lerato Mohlamenyane reflects on a debate that refuses to die on the continent

AS THE YEAR was winding down last December, the Open Society Initiative of Southern Africa (OSISA) in partnership with the National Democratic Institute (NDI), the Open Society Initiative for West Africa (OSIWA), and the Kofi Annan Foundation and others hosted a ‘Term Limits’ conference. Given the current COVID-19 pandemic, the conference was hosted virtually and brought together political scientists, constitutional experts, activists, and civil society actors. Former Malawi president, Dr. Joyce Banda, also participated in the conversations as did a number of ambassadors to unpack presidential term limits within the African context. This engagement forms part of a series of interventions that seek to engage political leaders as well as civil society to advocate for and mobilise citizens to promote respect for constitutional term limits. There are growing worries with leaders who cling on to office through constitutional amendments but also through rigged elections, including concerns on those who assume office through coups d’état.

Why do term limits matter?

So we may ask ourselves, why do term limits matter? Well, the answer to this question is very broad, however, it all comes down to the need to prevent tyranny and the safeguarding of a peaceful political transition from one elected president to another. According to an Afrobarometer (2015) survey about 75% of citizens in 34 African countries, are in favour of limiting presidential mandates to two terms. Of the 21 African countries that have maintained term limits, the executive officeholders have been in power for 4 years on average. However, the average time in power for the African leaders who have evaded term limits, in contrast, is 22 years. 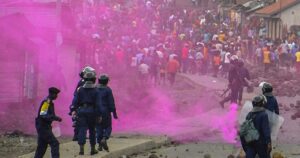 Unrest in Kinshasa, DRC after protests broke out. Then president Joseph Kabila had expressed intention to remain in office.
Credit: Amnesty International

From April 2000 to July 2018, limits were changed 47 times in 28 countries, with at least six failed attempted changes. In 23 cases, spread over 19 countries, the changes strengthened term limits by introducing or imposing stricter temporal boundaries on presidential mandates, but in 24 instances in 18 countries, the temporal restrictions on holding presidential office were removed or loosened. The changes in term limits have been executed in four different ways which include, the first set of amendments extended the length of presidential terms of office: from five to seven years as the case in the following countries Guinea (2001), the Democratic Republic of Congo (2002), Rwanda (2003) and Burundi (2018); and from five to six years in Chad (2018). Presidential terms were also extended in instances of intra-state conflict and capacity problems when elections were postponed in South Sudan (2015 and 2018) and DRC (2016). Secondly, changes increased the number of terms a person may hold presidential office, from two to three terms in the Democratic Republic of Congo (2015). Thirdly, changes were made to reset the clock for the incumbent president, as we witnessed in Zimbabwe (2013), the Democratic Republic of Congo (2015), and Rwanda (2015), where the incumbents had reached their absolute term limits but could argue that a new or revised constitution enabled them to start with fresh mandates unrestricted by previous constitutional limits. Fourthly, term limits were removed altogether in Guinea (2001), Togo (2002), Tunisia (2002), Gabon (2003), Chad (2005), Uganda (2005), Algeria (2008), Cameroon (2008), Niger (2009) and Djibouti (2010).

According to Wiebusch and Murray, there are three clusters of factors that may signal constitutional manipulation: instability, illegality, and illegitimacy. The first is, serious violence, including police crackdowns (for example in Cameroon 2008 and DRC 2015), political assassinations and political party-affiliated militia attacks, street protests, and damage to property, during a process of constitutional change, indicate that deeper problems may exist. Secondly, if the constitutional change is accompanied by violations of laws protecting fundamental rights, the process is undermined. Illegality may be signalled by violations of freedom of expression, association, and assembly that restrict political debate. For instance, protests may be banned (DRC 2015), opposition members may be locked up (Rwanda 2015), electronic communication channels may be suspended (DRC 2015) or journalists may be harassed. Instability and illegality will usually also lead to the third set of factors: those indicating illegitimacy. Violence, especially abuse of security forces, and disregard for the law undermine the legitimacy of a process. A lack of legitimacy may also be a result of exclusionary practices, the lack of credibility of proposed changes, or an absence of transparency, among other things.

Where to from here?

So where to from here? Firstly, there is a great need to mobilise and advocate for presidential term limits in Africa. Not only is this step important as it upholds the principles of good governance, it further ensures there is a continuation in the change of power within our African states, therefore, promoting the emergence of a new generation of leaders. These interventions require collaborative efforts from various civil society organisations, government institutions, pro-democracy movements as well as continental bodies such as the African Union (AU). At the core of this, should also be the political willingness of the Head of States to adhere to and uphold their country’s constitutions while respecting the rule of law and the institutions that defend it. Secondly, we also need to recognise and acknowledge the key role that young people play within African politics. In many African states, the youth have been able to organise and mobilise themselves through different movements that have challenged and toppled authoritarianism. Digital tools such as social media can instantly raise awareness on matters that would ordinarily be suppressed by repressive governments.

Finally, as the whole world finds itself trying to navigate through a global pandemic, we have to guard against political parties and their leaders using the COVID-19 pandemic as an excuse to manipulate constitutions to work in their favour thus disregarding the frameworks which have been put into place to protect the principles of good governance, human rights and the rule of law.

*Lerato Mohlamenyane is a Programme Associate in the Democracy and Governance Cluster at OSISA.