Vagrancy laws must fall! A landmark decision by the African Court on Human and Peoples Rights

Archaic colonial-era laws such as being a “Rogue and Vagabond”, and “Idle and Disorderly Persons”, “Loitering”, or “Wandering” (collectively “Vagrancy Laws”) can be found in criminal statutes or municipal ordinances of nearly every country in Africa, including many in the southern Africa region. For example, Botswana, Zambia, Zimbabwe, South Africa, Namibia, Malawi, and Madagascar all retain laws that criminalize minor infractions and non-criminal behaviour or the carrying out of life sustaining activities in public spaces. These laws are vague and arbitrary in nature, with their roots in the age of empire law making. The police use them to harass, extort, arrest and detain thousands of poor and marginalized people every day: the poor and homeless, street children, migrants, people with disabilities, sex workers, hawkers, and LGBTIQ+ people. Their ongoing enforcement essentially amounts to wide-scale, state-sanctioned criminalization of poverty and social identity. 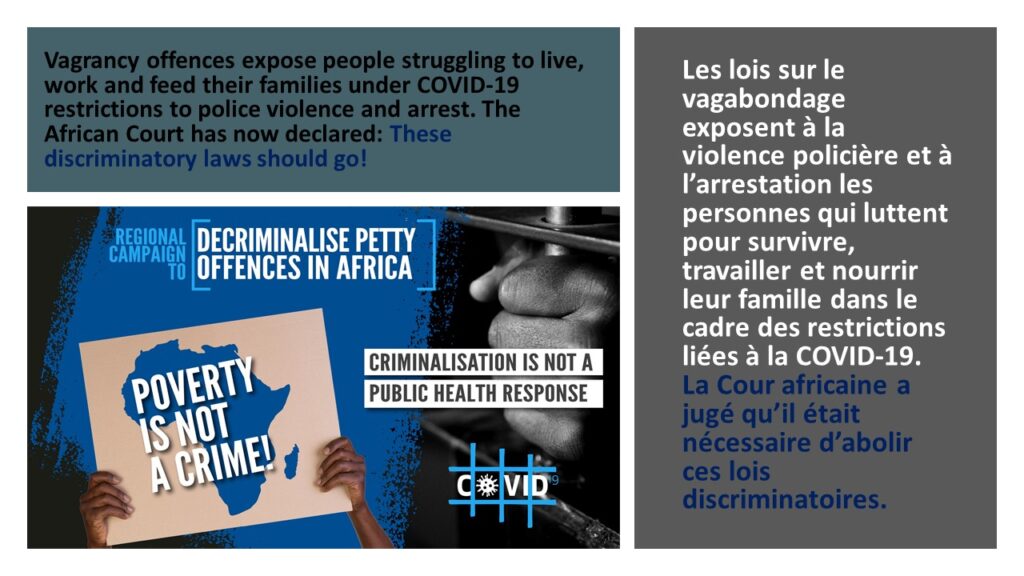 A pronouncement such as this is a major advancement for human rights on the continent. Delivered by the principal judicial organ of the African Union (AU), it carries significant legal weight and moral authority, and has the potential to reshape profoundly criminal justice outcomes for poor and marginalized people in Africa. It also means that three of the key AU bodies tasked with the protection and promotion of human rights have now pronounced on criminal justice responses to minor offences, the others being the Pan African Parliament through its new Model Police Act, and the African Commission on Human and Peoples Rights (ACHPR), whose Principles on the Decriminalization of Petty Offences ,when read together with the Advisory Opinion, now provide an authoritative legal interpretation of States’ Charter obligations.

The finding of the Court is also an important tool in challenging the overly securitized response to the COVID-19 pandemic. Measures in many African countries to curb the spread of the virus have had a disproportionate impact on the lives of poor and other marginalized people. Draconian lockdowns have resulted in arrests for ordinary, life sustaining activities such as fetching water or food, often using petty offence laws such as loitering. Likewise, the introduction of new COVID-related offences such as curfew violations or failure to wear a mask have resulted in an increase in mainly poor people being detained in already overcrowded, decaying police cells, significantly increasing the risk of infection for all.

The Advisory Opinion is a welcome development with the potential to influence the domestic and regional legal architecture across the continent. However, securing it was just one part of a much broader ongoing domestic and regional advocacy campaign to decriminalize poverty and status in Africa – https://pettyoffences.org/, which is supported by the Open Society Foundations Human Rights Initiative, the Open Society Initiative for Southern Africa, the Open Society Initiative for Eastern Africa and the Open Society Initiative for West Africa. Campaign partners will need to do a lot more if the spirit of the decision is to be reflected in domestic laws, policies and practice. In the absence of a concerted drive for implementation, and to hold States accountable in meeting their human rights obligations, it risks withering on the vine. Human rights organisations will thus need to urgently seize this moment and increase their ongoing efforts targeting domestic and regional spaces with a common message – archaic colonial-era laws criminalising poverty and targeting marginalised or vulnerable communities must go. States must replace them with rights-based legislation that enhances the dignity and socio-economic status of all.

While the Court’s landmark decision affirms and clarifies States’ legal responsibilities to remove all vagrancy laws that conflict with regional human rights standards, the real work lies ahead. It is now incumbent upon State actors, human rights organisations, and other relevant stakeholders to push decisively for legislative, policy and administrative reforms to give effect to the Court’s ruling. This will require all hands on deck going forward.